Cleveland Cavaliers star LeBron James said “being black in America is tough” in response to the news that Los Angeles police were investigating a racial slur spray-painted on the front gate of one of his homes. 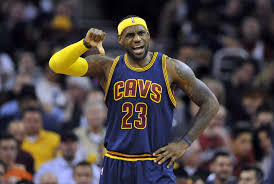 Capt. Patricia Sandoval, a spokeswoman for the Los Angeles Police Department, said an unidentified person spray-painted the N-word on the front gate. Police are investigating it as an act of vandalism and possible hate crime.

James spoke of the incident during NBA Finals media day on Wednesday.

“As I sit here on the eve of one of the greatest sporting events we have, race and what is going on comes again,” he said. “On my behalf, family’s behalf, I look at this as if this sheds a light and keeps the conversation going. My family is safe, that’s most important.

“Just shows that racism will always be a part of the world, part of America. Hate in America especially for African-Americans is living every day. It is hidden most days. It is alive every single day. I think back to Emmett Till’s mom and the reason she had an open casket, she wanted to show the world what her son went through in terms of a hate crime in America. No matter how much money you have, how famous you are, how much people admire you, being black in America is tough.”

In 1955, Till, who was 14, was brutally beaten and killed by two white men in Mississippi after the teenager had an encounter with the wife of one of the men. Till’s mother wanted the world to see what had happened to her son and held an open casket funeral. Till then became a symbol of the Civil Rights movement.

The Brentwood home is not James’ primary residence. Sandoval told The Associated Press that James wasn’t home at the time. She said the property manager told officers they believe the incident was captured on surveillance video.

She said someone painted over the slur before officers arrived on early Wednesday morning.

James and the Cavaliers are in the Bay Area to take on the Golden State Warriors for Game 1 of the NBA Finals.

James said he’s not his “normal energetic self.”

“My wife, talked to my wife. She’s the energizer bunny of the family. She said everything is fine,” James said. “Time heals all. End of the day, if this incident happened to my family can keep the conversation going, to keep progressing, not regressing, I’m not against it happening to us again.”

James also sees a lesson for his kids in the incident.