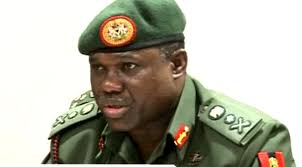 The Economic and Financial Crimes Commission has accused a former Chief of Army Staff, Lt.-Gen. Kenneth Minimah (retd.), and a company, Stoke Synergy Nigeria Limited, of diverting about N13.6bn belonging to the Nigeria Army.

The total sum of N13,650,795,245 was allegedly diverted by the two suspects into the accounts of four other companies given by the EFCC as Gogori Bureau De Change, My Honey  Oil Interbiz Limited, Gogori University Link Limited and M&M Babies Nigeria Limited.

Justice Gabriel Kolawole of a Federal High Court in Abuja, upon an ex parte application by the anti-graft agency, had, on June 30, 2017, ordered the freezing of Minimah’s account with the United Bank of Africa Plc and Stoke Synergy Nigeria Limited’s with Zenith Bank Plc.

The court’s order, according to the judge, will last for 90 days from June 30, when the ruling was delivered, but subject to renewal through an application by the EFCC.

Justice Kolawole, in the ruling, a copy which was sighted by one of our correspondents on Sunday, ordered the freezing of the two accounts “to aid the applicant (EFCC) in being able to conduct a thorough investigation into the financial dealings and transactions”.

A detective with the EFCC, Osas Azonabor, had supplied the facts of the case which formed the six grounds on which the commission’s lawyer, Mr. Andrew Akoja, based the two prayers, contained in the ex parte application on.

The six grounds reproduced by Justice Kolawole, in his ruling, summarised how the sum of N13.6bn from the Nigerian Army’s account  with part of the proceeds allegedly ending up in Minimah’s account.

The grounds of the application as reproduced in the court’s ruling stated, “The case being investigated by the Economic and Financial Crimes Commission relates to one of money laundering in the sum of N13,650,795,245.00 (thirteen billion, six hundred and fifty million, seven hundred and ninety-five thousand, two hundred and fifty-five naira) from funds of the Nigerian Army to companies: Gogori Bureau De Change, My Honey Oil Interbiz Limited, Gogori University Link Limited and M&M Babies Nigeria Limited.

“There is the need to preserve the money now traced to the accounts in the schedule to this application pending the conclusion of investigation and the determination of criminal charges to be instituted against the suspects.”

Arguing the  EFCC’s ex parte motion, EFCC’s lawyer, Akoja, sought two prayers, one of which was an order granting the EFCC “power to instruct a bank examiner to issue an order” to bank managers “or any person, having control of the banks where the suspects’ accounts were,  to freeze the accounts” of the suspects.

The EFCC sought, as its second prayer, an order granting the EFCC the power “to direct the banks” to supply any information and to produce the account opening documents to the accounts and the statements of the accounts “and to stop all outward payments, operations or transaction (including any bill of exchange) in respect of the accounts of the suspects.”

Akoja had told the court that “the application was designed to prevent dissipation of assets that are the subject matter of investigation/prosecution”.

He added, “The respondents (Minimah and Stoke Synergy Nigeria Limited) whose names appear in the schedule to the present application are being investigated for offences bordering on criminal conspiracy, criminal breach of trust and money laundering of the sum of N13.6bn.”

He argued that the money was “part of the proceeds of alleged criminal activities traced to the suspects’ accounts”.

In his ruling, Justice Kolawole held that he was “convinced and satisfied” that there were “genuine and probable grounds” to grant the EFCC’s application.

The judge stated, “I am convinced and satisfied that there are genuinely probable grounds for this court to lend its powers to aid the applicant in being able to conduct a thorough investigation into the financial dealings and transactions which were mentioned in the report in Exhibit ‘EFCC-1’.

The judge, however, ruled that he would not allow the freezing of the accounts to “run indefinitely or pending when the applicant (EFCC) is able, at its own time or convenience, to conclude its investigation”.

Justice Kolawole added, “To do so is to make expropriatory orders, granted ex parte, to operate as a final order of indefinite duration without affording the respondents, who are affected by the execution of these orders, a hearing,”

He therefore ordered that the order would last for 90 days from the date the ruling was delivered (June 30).

The judge ruled, “The banks listed in the Schedule to the instant ‘motion ex parte’, shall ensure that the freezing orders on the accounts disclosed in this ruling, shall be automatically unfrozen upon the expiration of 90 days from today unless the applicant is able to serve on them, an order of this court by which operation of the said orders are renewed and elongated for another specified period of calendar time.”