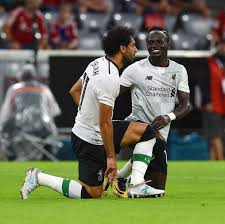 MUNICH -- Liverpool maintained their unbeaten record in the preseason with an impressive 3-0 victory over Bayern Munich at the Allianz Arena in the Audi Cup on Tuesday.

Jurgen Klopp's side, who have now won all six of their warm-up matches this summer, will play Atletico Madrid in the final of the preseason tournament at the Allianz Arena on Wednesday thanks to first-half goals from Sadio Mane and Mohamed Salah.

Daniel Sturridge added Liverpool's third late on but was then withdrawn almost immediately after the goal with an apparent injury.

Mane and Salah played together for the first time against Bayern and used their blistering pace to devastating effect.

On paper, this was the toughest test of Liverpool's preseason schedule, but they got off the flying start and were ahead with just seven minutes on the clock.

False nine Roberto Firmino dispossessed home debutant Corentin Tolisso inside his own half and then played in Mane, who drilled the ball beyond Sven Ulreich.

Bayern, who had Thiago Alcantara come off early, were struggling to deal with Liverpool's pressing and the pace of their counter-attacks. And Liverpool's pressure finally told when they made it 2-0 in the 34th minute.

Mane, again, was central to the goal and his clever footwork allowed Alberto Moreno to hit a cross-turned-shot that was parried by Ulreich into Salah's direction as he headed in at the back post to double the visitors' lead.

Salah has hit the ground running since arriving from Roma for a club-record fee in June, scoring four goals so far in the preseason. Meanwhile, his forward partner on the opposite flank, Mane, looks sharp after making just his second appearance since recovering from knee surgery.

In the second half, Liverpool thought they had a third goal and were well into their celebrations before the referee cancelled out Marko Grujic's effort as it was deemed Adam Lallana obstructed the view of the goalkeeper.

Second-half substitute Sturridge did make it 3-0 in the 84th minute with an audacious lob over Ulreich. However, the striker did not celebrate the goal after it appeared he injured himself during the process and was replaced by Dominic Solanke.