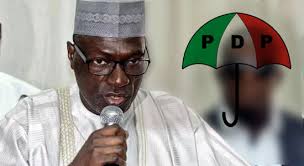 The Chairman, National Caretaker Committee of the Peoples Democratic Party, PDP, Ahmed Makarfi, said the committee was open to reconciliation that would strengthen the party.

Mr. Makarfi gave the assurance while addressing members and supporters of the party after the Supreme Court judgment on the party’s leadership crisis delivered in favour of the committee on Wednesday.

He described the judgment as “no victor, no vanquished’’ and said, “we must be open to reconciliation, but there’s a caveat.

“Reconciliation does not mean we take what belongs to people and give it to you. It must be based on equity, equality and values.

“With this caveat, we should be prepared and willing to reconcile with everybody.

“Anybody that can meet these criteria, we should be willing and open to reconciliation with such a person, no matter who they are.”

He urged Ali Sheriff and his group to join hand with him to move the PDP forward.

Mr. Makarfi also called on members of the party not to discriminate among members who belonged to different factions before the court’s judgment.

“We should continue as friends, knowing that there are things we can do together; there may be things we may not be able to do together.

“We are willing to do everything on the foundation that I had mentioned.

“I urge them to come forward, join hands with us and let’s see how we can move PDP forward,’’ he said.

Makarfi commended PDP members and the judiciary for the fair judgement, saying PDP never lost faith in the judiciary.

“It is a battle to do away with dictatorship in political parties and this will never repeat itself,” he said.

He promised that the committee within the next few days would begin consultation and come up with a programme of meetings between it and expanded PDP caucus.

“These meetings will include Expanded Caucus, Board of Trustees and National Executive Committee so that we can take far-reaching decisions on how to take the party forward.”

On his part, Governor Ayodele Fayose of Ekiti State and Chairman of PDP Governors Forum, said that the court verdict had placed PDP on good stand to return to power in 2019.

Mr. Fayose said that PDP would make maximum use of the judgment to reposition the party, adding that the forum would not fight Sheriff and his loyalists.

“We will not fight them. We should just come back together so that we can celebrate 2019 together.”

Also speaking, the Deputy President of Senate, Ike Ekweremadu, described the judgment as a collective victory for the entire party faithful and the nation’s democracy.

“I am happy that the Supreme Court has brought this protracted leadership tussle to an end today.

“There is no victor and there is no vanquished, but a collective victory for our party and the nation’s democracy.

“No democracy can prosper in the absence of a virile opposition or under the extreme hardship Nigerians have faced over the past two years. Citizens deserve a viable alternative,” Mr. Ekweremadu said.

He called on PDP leadership and elders to immediately initiate an all-inclusive peace, reconciliation and rebuilding process in the party.

The lawmaker said that it was important to reunite everybody under the “big umbrella and reinvigorate the biggest party in Africa to bounce back to the rescue of the suffering masses of Nigeria, come 2019”.