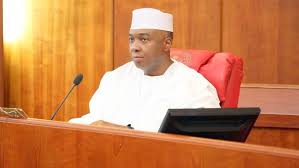 Office of the Senate President on Thursday said the sacking of aides to Senator Bukola Saraki is for efficiency. It said the exercise was to reposition the office for efficient service delivery.

The office, which refused to confirm the number of those affected, explained that most of the officials affected were those posted from the National Assembly Service Commission, who were deployed back to the service.

Sources in the Senate, however, put the number at 98.

A source in the Senate, who spoke on condition of anonymity, said most of the affected officials were inherited by Saraki, including the Director of Protocol, Arthur Ndiwe, who had occupied the office since Senator Ken Nnamani was the Senate President.

It was further gathered that those affected were issued sack letters through the Chief of Staff to the President of the Senate, Hakeem Baba-Ahmed, in batches.

The Special Adviser to the President of the Senate on Media and Publicity, Mr. Yusuph Olaniyonu, while briefing journalists on the development on Thursday, said the downsizing was based on Saraki’s discretion based on the judgment of a review committee.

Olaniyonu explained that the “staff review” was the outcome of an assessment exercise which started four months ago.

He said, “It is entirely his (Saraki’s) discretion to determine who works with him, those who are helping his agenda, and those areas where gaps need to be filled. This is important for the efficiency of the office.

“It is not a negative thing; it is to ensure that the office is more invigorated and better positioned. It is possible some new people may also be joining in areas lapses have been observed.

“It is good for a public official like the Senate President to have given everybody the opportunity to serve. The last 26 months were good enough to determine who would fit into his agenda for the next 22 months of the lifespan of this Senate.”

Olaniyonu further said the members of staff were in three categories: those who were considered fit to remain in office, those who needed to be removed, and the fresh hands needed to be brought in.

He added, “The restructuring that has just taken place on the workforce in the Office of the Senate President being reported as mass sacking in the media was meant to reposition the office for service delivery, the outcome of which has affected three categories of members of staff in different ways.

“The first category of workers are those that have been found capable and competent to continue with their job, like all the entire members of the media unit.

“The second category of workers are those earlier seconded from the National Assembly bureaucracy to serve in the Office of the Senate President but now directed to go back to their civil service job, like the Head of Administration, Mrs. Folashade Adigun.

“The third category of workers are those whose services within the last two years were not all that satisfactory in the eye of the committee set up by the Senate President to carry out the repositioning exercise of his office.”

Olaniyonu, however, did not provide details on the number of those affected in each category. He also dismissed the reports that the exercise was meant to cut cost, insisting that it was for efficient service delivery.

Saraki had in December 2016 directed the National Assembly management to carry out a “comprehensive human resource audit.”

His former Chief of Staff, Senator Isa Galaudu, who later resigned his appointment, had in a letter to the Clerk to the National Assembly, Mohammed Sani-Omolori, said the measure was aimed at “verifying the skills, efficiency and motivation of the employees of the National Assembly.”

“The President of the Senate expects the assessment to be completed within 90 days and progress reports be submitted regularly until completion,” it partly read.

The letter was dated December 16, 2016, and titled, ‘Carrying out a Comprehensive Human Resource Audit in the National Assembly.’

We had reported in January 2017 that about 100 aides to Saraki were facing job loss.

It was reported that Saraki had set new terms and conditions for retaining their jobs, with their retention based on their performance in their respective offices.