Watford have confirmed the signing of England U21 midfielder Nathaniel Chalobah from Chelsea in a permanent deal reportedly worth £5 million.

Chalobah has signed a five-year contract to return to Vicarage Road -- where he spent the 2012-13 season on loan from the Blues -- in search of regular first-team football in the Premier League.

Chelsea were reluctant to lose Chalobah but had little power to keep the 22-year-old once he entered the final year of his contract this summer and could not be convinced that he would be given more senior opportunities next season.

Chalobah joined Chelsea's academy at the age of 10 and spent time on loan at Watford, Nottingham Forest, Middlesbrough, Burnley, Reading and Napoli before establishing himself on the fringes of Antonio Conte's team last season, making 15 appearances in all competitions. 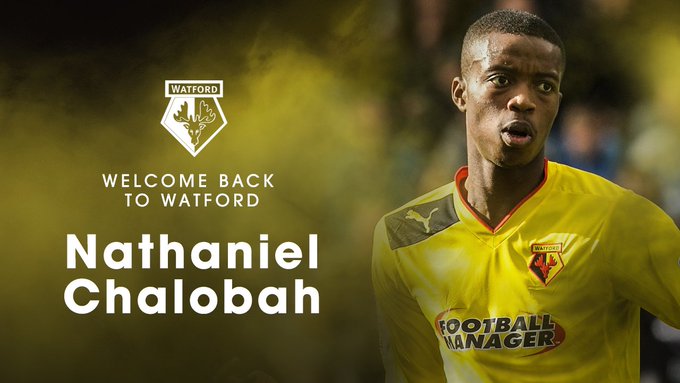 The 22-year-old has represented England 97 times across various youth levels and impressed at this summer's Under-21 European Championship in Poland. His younger brother, Trevoh, is a highly-rated defender in Chelsea's academy.

While with the England squad during Euro 2017, Chalobah admitted he was pleased Conte gave him the chance but conceded it was tough to stay in the Chelsea team.

"He showed faith in me in preseason and he liked the way I was working. That was a confidence boost," Chalobah said at the time. "As a player, you just get the vibe.

"It's a very high standard at the club and the club has an amazing academy and produces really top players.

"It's just there's that barrier getting in there and staying in there. You're playing for one of the best teams in Europe, they're in the Champions League and the demand is high on winning."